After leaving Ormond by the Sea, we were driving south toward Jupiter Island, when Max suddenly noticed he had four inches of play in the steering wheel…not good when you are towing a 6,500 lb trailer!  So we called several Chevy dealers to see who could service it the next day and provide a loaner vehicle. Luckily, we found one near Jupiter with an opening and they were able to fix it in half a day as it had been caused by a single loose bolt.

Our new campsite for this leg of the trip was at the Dupuis Campground in the South Florida Water Management District on the east side of Lake Okeechobee which was FREE! It was a 45 minute drive from our daytime destination of Jupiter Island, but the price was right. In researching for this trip, we found that prices for places to stay with an RV vary greatly from expensive RV Resorts ($60-$100 per night), to mid-range State, National & County Parks ($25-$40 per night), to inexpensive/FREE Land Management Areas, BLM land & various boondocking options (FREE to $15 per night). Granted the more you pay the more amenities you typically have (water, sewer, power, laundry, proximity, etc.), but if your RV has enough power and tank holding capacity you can still camp very comfortably “off the grid”.

Our goal is to spend less than $100 per day on gas, food, & campsites, so if we stay at an expensive RV Resort right on the beach we try to offset it by staying at cheaper places other nights. For being free, this place was fabulous. It had fire rings, picnic tables, hot showers, water, an RV dump station and horses!  However, we didn’t spend a lot of time there other than sleeping as we wanted to make the most of the beaches Jupiter Island had to offer.

Jupiter Island, Florida was made famous in recent years by celebrities building mega mansions such as Tiger Woods and Celine Dion. It definitely has an upscale vibe to it, but the public parks and beaches are open to everyone and should not be missed.  Our favorite beach was Blowing Rocks Preserve on Jupiter Island. The parking lot is really small, so it’s best to get there early.  The beach has what’s called the Anastasia Rock Formation visible along the shoreline which makes it uniquely beautiful.  We loved the fact that due to the small sized parking lot, we felt like we had the beach almost to ourselves.  We also enjoyed Coral Cove beach just down from there which has ample parking, beautiful white sand and gentle waves.

To cap off the day, we wanted to do a little paddling. DuBois Park is a great spot as its right on the Jupiter Island inlet connecting the Atlantic Ocean to the Indian River. It has everything from beaches to shaded grilling and picnic areas, a kayak launch area and public boat docks.  Since we brought pack-rafts along with us on this trip, we thought this would be the perfect place to try them out. A pack-raft is similar to a blow up kayak, but much lighter and more compact; making it easy to put it in a backpack for a hike and blow it up when you want to cross or paddle down river.

My plan was to paddle down river to see the mansions that line the shore, however; after paddling for an hour and not getting very far Max suggested we turn around to make it back before sunset. Really glad we did, because paddling up river in pack rafts is not for the faint of heart.  There were several points where we were paddling as fast as we possible could and were still going slowly backwards!  Finally, after finding several breaks in the current, we were able to inch our way up river until we made it safely back to the park.  Jupiter Island was definitely worth the three days we had there and we wish we could have stayed a day or two longer, but our first month on the road was already booked in advance so we had to keep on moving.

At this point in the trip, just as we were getting more comfortable with day to day living in Big Red, we were faced with the challenge of short battery life in our RV.  We found that with basic usage of LED lights, water pump, fridge, etc. our single RV/marine lead acid battery was lasting us only one day.  After that we would have to get out the generator to recharge it which gets to be a pain after a while. So the plan is to hookup a second battery for the time being so that we can get at least two day’s worth of power before having to recharge…more to come on this later. 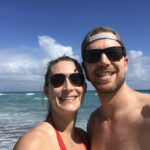 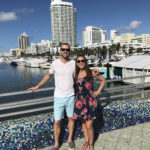