Located near the mouth of the Mississippi River in Louisiana, New Orleans, is a world renowned city known for its unique cuisine, creole culture and vibrant night life, most notably Mardi Gras. Neither Max nor I had been to Louisiana before, so when we first started planning our 14 month road trip, New Orleans was one of the “must see” cities on our list. We were especially looking forward to visiting the Big Easy for its vibrant night life and spicy cuisine.

We arrived in New Orleans at the beginning of March – two weeks after all the craziness of Mardi Gras had passed. Since we weren’t willing to pay the astronomical rate of $150 per night to stay at the only RV park in the French Quarter, we stayed across the Mississippi river at Bayou Segnette State Park instead. This park was much more reasonably priced ($37 per night) and was still relatively close to the city (30 minutes away). Oh and this park had free laundry to boot…if you could snag an open machine! 😉

Parking in the French Quarter can be a nightmare due to its narrow roads, high prices and restrictions, so being that we were staying just across the Mississippi river, we opted to take the ferry. Getting there from our campsite was super easy as we parked in the Algiers neighborhood (free) and took the Algiers ferry ($2) across the river right into the heart of the city. We took the ferry over at night and were treated to a beautiful display as the city lights lit up the night sky and sparkling on the water.

Our first stop in the French Quarter was Bourbon Street and it definitely lived up to its reputation! Wowza…we expected Bourbon Street to be crazy, but nothing prepared us for how busy it was and how much trash was on the ground!?! There was literally trash, beads, puke…you name it…all over the street! I think we mistakenly envisioned the party scene to be more like Vegas set in a Gaslamp district, but it seemed more like a college frat party gone wild. We heard from a local that they judge how great the party it is by how much trash is on the ground the next morning. While we had fun seeing what Bourbon Street was all about, Max summed it up best when he said, “This would have been REALLY cool when I was 21, but not so much at 33”. Ok, now I feel old!

New Orleans is famous as being one of America’s top culinary cities. However, being on a $100 per day budget, we opted to order Po Boys from a grab and go spot rather than eating at a fancy restaurant like Galatoire’s where dinner jackets are a must. For dessert, we walked down to Jackson Square and ordered beignets and coffee from the famous Café Du Monde. The beignets were delicious and reminded me of an elephant ear you’d get at a carnival covered in powdered sugar! We would have loved to stay and explore the Jackson Square area more, but it was getting late and the gates to the square had closed.

The following day was rainy so we thought it would be fun to visit the National World War II Museum. Prior to leaving on our trip, I had read “The Rise and Fall of the Third Reich”, which peaked my interest for all things World War II. Apparently I wasn’t the only one who thought going to a museum on a rainy day was a good idea as the place was jam packed! Through a bit of quick thinking we were able to purchase tickets on our cell phones and pick them up at will call which saved us an hour of waiting in line.

The purpose of this WWII museum was to show America’s involvement in the war in every facet. The exhibits were very interactive with rooms staged to look like scenes from Normandy, various battlefields in Europe and the South Pacific. The museum displayed thousands of WWII artifacts such as uniforms, personal belongings, diaries and artillery. There was so much to see that towards closing time Max and I were running from room to room to make sure we didn’t miss anything. One of the highlights was the large hanger with restored airplanes that were used in WWII. They had multiple viewing platforms that allowed you to see the planes from both below and above them.

On our last day in New Orleans we drove the famous river road to see the plantations. Max wanted to photograph Oak Alley’s famous live oaks so we paid the $25 entrance fee per person allowing us to take the “big house” tour and wander around the property. Unfortunately, the “big house” tour was not self-guided and was quite congested for having purchased tickets in advance. They herded twenty five people room by room through talking about each artifact in the house. This is definitely not our style of sight-seeing, but we had a good eye roll and laugh about it along the way. In hindsight, we would recommend skipping the tour altogether and photograph Oak Alley from the street looking towards the mansion. This way you can avoid the $25 per person entrance fee and you still get to enjoy the beautiful scenery of the live oaks. 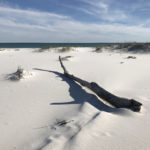 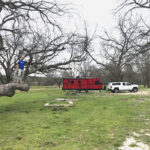