After a six and a half hour hike out of Havasu Falls we still had a five hour drive ahead of us to our next destination of Page, Arizona.  Roughly three hours into our drive, the winds started to pick up gusting over 35mph.  We thought about stopping somewhere to spend the night, but found no camping options anywhere between where we were and our destination. So, we downed some instant coffee and listened to several true crime podcasts to keep ourselves awake.

With only a few miles left until Page, the winds started gusting between 50-60 mph. Exhausted after the long day of hiking and driving, we finally made it to the Horseshoe Bend parking lot at two o’clock in the morning!  As soon as we got out of the truck we were pelted with sand and dirt. We quickly ran inside our RV and slammed the door, but with the wind howling and the trailer shaking, all we could think about was the potential damage being done from the debris outside.

At 2:30AM, we made the decision to pack up and drive to the next closest overnight parking option – Walmart. This was our very first Walmart overnight experience and while we were a bit leery of the whole idea, we had no other options this early in the morning.  Upon pulling into the parking lot, we were surprised to see 30+ other RVs parked overnight.  Was that normal or was it just because of the windstorm?  We weren’t sure, but it made us feel better seeing other RVers there too.

In search of a spot protected from the wind, we figured our best option would be parking next to the cement wall.  It was more protected than back at Horseshoe Bend, but the winds still rocked the trailer the entire night. We were just happy our RV wasn’t getting blasted by sand and dirt any longer!  As soon as we got inside our RV, we closed the blinds and crashed.

The next day after sleeping in a bit, we stocked up on groceries and searched for another place to stay.  At first glance, it didn’t look like Page had many free camping options, but one of Max’s photographer friends suggested a free site 10 miles away called Glen Canyon Corral.  On our drive to this new campsite the winds were still blowing intensely.  About 3 miles from Glen Canyon Corral we looked out the truck window to see a huge flap hanging off the side of our RV.

We immediately pulled over on the side of the road to find that 10 feet of our RV side paneling had come loose and was flapping in the wind.  I helped bend the panel back in place, while Max drilled a new hole and screwed it on. The wind and sand was blowing so hard that Max had to put on protective goggles to do the repair.  With only one screw holding the remainder of the panel on, we were lucky the whole panel didn’t fly off our RV while driving! The bad news is we now have a big dent where the panel bent in half.  Later that evening we met up with Max’s photographer friends Matt Meisenheimer & Cody Wilson and had a delicious fajita dinner at El Tapatio restaurant.

The next morning while Max, Matt and Cody went off photographing slot canyons, I stayed back to get some work done on the blog.  At some point while I was back at the trailer, I noticed a wet area forming on the floor directly under our sink.  When Max returned home I showed him the issue and we determined it was coming from one of the pipes underneath the sink.

While we were investigating the cause of the leak, Max heard what he thought sounded like a mouse. All of a sudden he jumped as he saw the mouse running to the other side of the cabinet.  As Max searched underneath the cabinet with a flashlight, the little critter popped up through the stove top and stared straight at me taunting me.  I shrieked when I saw him as I’d had never experienced a live rodent in my house before!

Max took off for the hardware store leaving me and Mr. Mouse alone in our 28ft trailer. The whole time Max was gone I sat still listening for the mouse and could hear small squeaking noises coming from the belly of our trailer. An hour later, Max returned with hose crimps and several varieties of mousetraps.  We set the traps in various areas of the trailer and waited. After a bit of trial and error, Max was able to reseal the pipe, eliminating the leak.  With no action on the mousetrap front, we went to bed hoping for better luck in the morning.

Sometime in the middle of the night, Max awoke to a Velcro-like sound.  He jumped out of bed, opened the cabinet under the sink and sure enough it was the mouse stuck to the sticky trap.  As the mouse was trying to get unstuck, it began frantically chewing and shredding the plastic coating off wires nearby.  Thankfully Max was able to remove the mouse before it chewed through the entire wire, but we did have to make another trip to the hardware store for electrical tape to cover the newly exposed wires.

On our last day in Page, AZ while the guys went off to shoot another remote location, I decided to take a tour of Lower Antelope Canyon.  Over the last few years, Lower Antelope Canyon has become extremely popular, expensive ($50 per person) and has some very strict rules for entry.  If you plan to go with a few people you would want to book a tour in advance as they often sell out.  However, since I was going by myself I figured I might have a chance at scoring a last minute spot.  I packed a small daypack with a GoPro, iPhone, money and water bottle and headed off for Lower Antelope Canyon.

When I arrived, I lucked out and got the very last spot on the tour that was leaving in 15 minutes. I paid the $50 entrance fee and was all set to go.  After handing my ticket to the lady at the entrance, she told me they didn’t allow packs unless they were for hydration and the hose was visible.  Mine technically was a hydration pack, but on this day I put a water bottle in there instead of the bladder with hose.  So, I ran back to the car, dropped off my pack and took with me my wristlet (containing money), Go-Pro and iPhone.

Once I made it back to the entrance, they told me I couldn’t bring in my wristlet or Go-Pro as they don’t allow purses or camcorders.  When I asked if I could use the Go-Pro strictly in photo mode, she said Go-Pros were not allowed period.  She did say I could bring a regular camera or smart phone, but that was basically it. So, I ran back to the car for a second time, dropped off everything except my half-charged iPhone and made it back just as my tour was leaving.

Each tour group had roughly 15 people in it and followed the leader single file through the mile long canyon. Unfortunately, they don’t give you much time to linger in any one spot as there is another group of 15 people right behind you.  This makes it tough to take any good pictures as a casual photographer, much less a professional one.  Regardless, the canyon was beautiful and definitely worth seeing at least one in your lifetime.  You can still take a decent selfie in there, but good luck trying to get a photo without other people in your shot!

After several days and night of crazy wind, we spend one last night wind (and mouse!) free in Glen Canyon Corral.  The next morning we headed towards Utah to pick up Max’s mom for a week in Zion National Park. 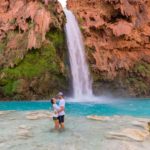 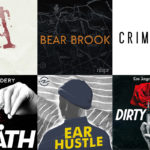 10 True Crime Podcasts for Your Next Road Trip