Bienvenidos a Miami!  As mentioned in a previous post, we had planned our month in Florida ahead of time, however; Miami was the only place where we didn’t have reservations as there are very few RV spots near the city and the few that exist book out months in advance. So we left the dates open in hopes of finding a last minute cancellation and kept calling around.  Two days before arrival, we called Embassy RV Park (30 minutes north of Miami) and left a messaged asking if they had two nights available.  The park manager called me back almost immediately to tell me that while they were fully booked with seasonals, they could make an RV spot temporarily available for the weekend by having us park on the side of their shuffle board court. I said we’d take it!

We were thrilled as we had been looking forward to going to the Miami Yacht Show near South Beach. Up to this point in the trip, we had been wearing athletic clothes almost every day so this was an opportunity for me to dress up a little, put on some makeup and feel a bit more girly and glamorous! Good thing I spruced up a bit, because the Yacht Show was the epitome of flaunting what you’ve got with men in Italian suits wearing their Rolexes, to countless women wearing designer shoes and one in particular carrying her Hermes Birkin bag (they start at $10,000!) with her little dog in it!

We thought once we paid the entrance fee we’d be able to walk the docks and occasionally board a yacht or two to see the interior.  Well, that turned out to be partially correct for used yachts, but if you wanted to get close to a new yacht and have the opportunity to board you had to sign up in that company’s database, give them the specs of your current yacht and tell them what you are looking for in your next yacht purchase.  The conversation often went like this… “Hi, Nice to meet you. So what type of yacht do you currently own? Well, we don’t own one yet, but we’d love to take a look around. Gotcha, well tours are for serious buyers only.  Are you interested in purchasing?  Not at this time, we are just browsing.  Ok, well feel free to come back when you are interested in purchasing.”  You can see where this is going…so we basically got to see the yachts from the dock, but didn’t get to tour any unless we wanted to bullsh*t our way through.

Man, sometimes I wish I was a better schmoozer for situations such as this, but I really suck at it!  We had just been rejected from one yacht that was for charters only, so I said to myself, “I paid to get in here so I’m going to tour a dang yacht!”  I put my game face on and the next yacht we tried to tour the guy actually let us board.  When he asked me about my interest in the yacht I asked him what the cost was to charter for a week…he then gave me a funny look and said, “This boat is for sale, not for charters.  Are you interesting in purchasing?”  Argh, failed again!  We still had fun at the Yacht show, but it proved that the $25 per person entrance fee only gets you so far as you need to already own a yacht (or pretend you already own one) if you wanted access to the full experience.

After the Yacht Show, we relaxed with some Pina Coladas on the beach and strolled the board walk toward South Beach. On our walk, we had a good laugh at the juxtaposition of our past life vs. our current life.  Nine years earlier we had vacationed on Miami Beach, spending the days near the beach or hotel pool, going out to fancy dinners each night and clubbing at the hottest nightclub in Miami (LIV @ the Fontainbleu).  Now, we had quit our full-time jobs, were on a 14 month road trip living in our RV “Big Red” and were on a budget of $100 per day. This meant that between the RV Park and the Yacht Show there wasn’t anything left over for fancy meals on the town. Guess that’s part of our new found RV life!

I should mention here that though my career up to this point had been in merchandising for Target either directly or indirectly, we have now gone to the “dark side” and become avid Walmart Grocery shoppers.  Why, you might ask? Well, first and foremost, Walmarts are EVERYWHERE. Even if you are in the middle of nowhere, there is likely a Walmart within 20 miles from your location.  Good luck finding a Whole Foods, Costco or Target in some of these places!  Secondly, if you are on a budget, Walmart is cheap and has a much better grocery selection than Target (Sorry Target, but you probably already knew that!). Third, if you want to be efficient with your time, consistency helps so being able to find the same produce and brands everywhere we go cuts down on grocery shopping time. Oh and lastly, Walmarts always have massive parking lots which makes them easy to maneuver and park our 28’ RV. So keep an eye out on People of Walmart.com as you never know when we may be featured. 😉

Anyway, it was after dark when we got back to our RV the night of the Miami Yacht Show. We made dinner, cleaned up and noticed a few ants here and there crawling inside Big Red.  Max took care of the ones he saw and suggested we get some ant killer the following day to nip it in the bud. The next morning we woke up to a full on ANT INVASION!! The ants were literally everywhere…in our cupboards, inside food packaging that had been rolled and sealed with a clip.  They were inside our fridge, in our laundry hamper, in our wardrobe closet, etc.  To be clear, we are super clean people!  Max could even be considered OCD clean, so we really couldn’t believe this was happening to us!?  We never leave any food out, always hand wash our dishes after every meal and Max sweeps our floors 8 times a day!

After tearing our place apart trying to find what caused this invasion, we still could not find anything specifically that attracted them.  It wasn’t until a couple hours later after Max came back with ant killer that we realized we were parked on a giant ant hill!!  The ant killer helped to decrease the number of ants invading Big Red, but what we really needed to do was to get the hell out of there!  After leaving Miami, it took us a week to get rid of all of the ants, but we eventually got back to living sans ants. 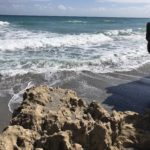 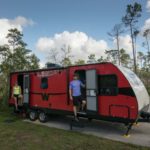