For this leg of the trip, I searched for places to stay near the beaches of Sanibel or Captiva, but they were all booked or way out of our price range.  So we turned to another website for RVers called BoondockersWelcome.  This site allows you to find other RVers that serve as hosts and are willing to let you park overnight on their property for short stays (usually 1-4 days) for free.  In all honesty we were using this site as a last resort because we thought it would be weird sleeping/parking overnight in a strangers driveway, but with limited options we decided to give it a try. We found a host with 5 star reviews in the bayside city of Punta Gorda, but what really caught our eye is that their profile mentioned they belong to a boating club and anyone who boondocks with them is welcome to go boating with them.  So we pushed aside our hesitancy and requested to stay for two nights.

When we arrived at their house, I’ll admit it was a bit awkward ringing their doorbell to introduce ourselves to complete strangers, but they could not have been more welcoming. They showed us where we could park (in their driveway) and where we could get power and water. Then without skipping a beat the host invited us to go boating with her the following afternoon to which we most definitely obliged.  The nice thing about living in an RV is that no matter where you are – at a beach, in the mountains or parked in someone’s driveway, you simply shut the blinds and find yourself in the comfort of your own home.

The following day was 90 degrees and sunny…perfect for an afternoon on the bay.  As we drove over the bridge towards the marina, I noticed a dolphin jumping several feet out of the water over and over again. It looked like it was having the time of its life!  Once we got to the boat, we took note of where we had seen the dolphin and boated in that same direction.  Within 15 minutes we saw a whole pod of dolphins playfully jumping and splashing in the water.  Our host said that in all her years of boating there, they’ve only seen dolphins a handful of times, but never as many or as playful as we were seeing.  Now there appeared to be multiple pods and they hung around splashing and playing for roughly an hour.  It wasn’t until after we took some video that we realized it was likely mating season for the dolphins as we unknowingly captured some R-rated moments with dolphins getting a bit frisky!

After our dolphin encounter, we jumped in the water to cool off for a bit and headed back towards the marina.  On our way, we encountered stingrays gracefully swimming near the top of the water. Once back at the marina, we topped off our boondocking experience by treating our host to ice cream at her favorite shop Harborwalk Scoops and Bites. 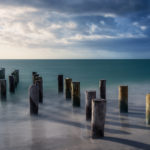 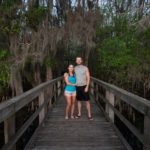